Welcome to the Create it REAL Developer Portal! Create it REAL developer portal is a one stop shop that provides an opportunity for innovation using Create it REAL's APIs to deliver innovative services such as Slicing as a service. This documentation is created to provide you all the information you need to connect to Create it REAL APIs.
We recommend you go ahead and try our Sandbox:

Endpoints are described with an HTTP method and a path.
Example:

Prepend the REALvision API URL to the path to get the full endpoint URL. Example:

Curly brackets, {}, in the path indicate a placeholder value that you must replace. Example:

You can use the errorCode property for error handeling on your front-end application. Each error has an explination message that explain what exactly went wrong.
Most of the errors are related to unauthorized access, wrong input or a malformed request. Some are related to the slicer, this is a list of the possible errorCodes that you might receive:

To start developing with our APIs, you’ll need to sign up for a developer account. Here is what you do:

Now that you are signed up, you can login to the Developer portal at anytime using your email and password.

That being the case, the next step is to request a Subscription Key by following these steps:

Congratulations, you just subscribed to the REALvision Online product. However, you'll need the approval of the API team first before you could receive the Subscription Key and start calling the API.

Once your subscription request is approved, you will recieve an email notification with all the details needed to start consuming the API.

You're getting closer to finally getting a Subscription Key, the next steps assume you have been granted approval to use our APIs by the API Team. If you were granted approval, you will have received a notification email notifying you that your request has been accepted.

That being the case, the next step is to get a Subscription Key by following these steps:

Note that when you use our integrated Sandbox, the API key will be filled in for you automatically.

Congratulations, you now have a Subscription Key that you can use to consume our APIs.

Now that you have an API key, you'll be able to consume our APIs freely.

Important:
The API is still in its early stages, which means that it will undergo a lot of changes along the way while incorporating feedback from our customers and partners. Keep in mind that these endpoints might change in the future.
You want more details ?

This API heavily depends on how much you understand a Workspace file. We decided to use the Workspace file for this API due to many reasons, chief among them is tha fact that STL files lack a lot of information needed to slice a 3D Object:

Hence, the Workspace specification was born. It is designed to include all the information above and more.

This section describes the structure of a REALvision Workspace file and gives you a tool you can use to easily generate a Workspace file given an STL file.

To understand the structure of that same example workspace file, keep reading.

This section describes how to use the Modifier feature.
But first, let's get a good handle on the concept.

Note:
At the moment, Modifiers support changing one single setting which is the Infill Density. More settings coming in the future, settings like:

A simple example to illustrate the Modifier feature would be taking two cubes: Cube A and Cube B. Both are objects, Cube A is a regular object and Cube B is a Modifier object.

Cube B has the power to change one of Cube A's settings, in this case, that setting is the Infill Density. Meaning, Cube B can change the Infill Density of Cube A in a limited area and NOT the entire object.
The area in which that change takes effect is limited to the intersection of the two objects.

Take a look at the following image: 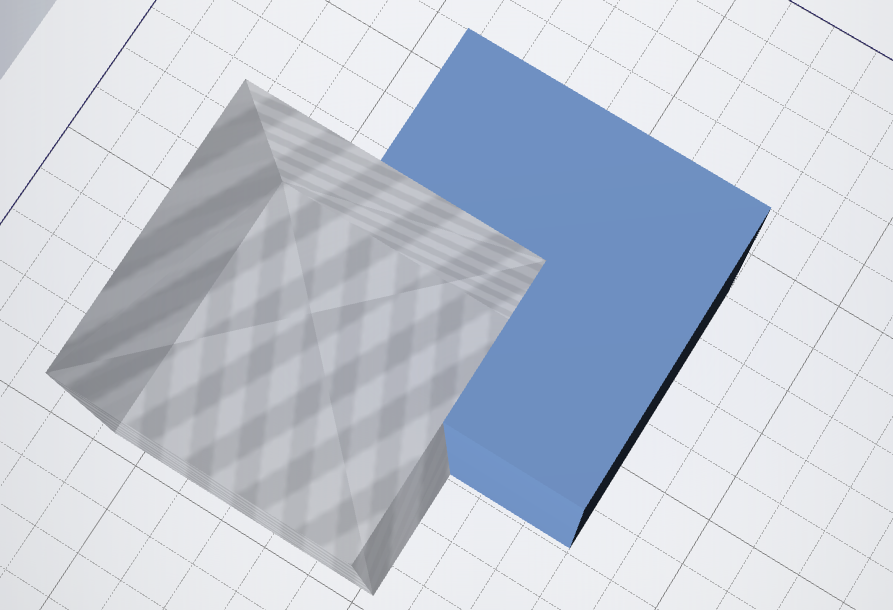 You'll notice two cubes intersecting. The blue cube is Cube A. It's the cube whose settings we want to change in just a limited area and not in the entire object. The other grey cube, is the Modifier. It has an Infill Density that is different from Cube A's Infill Density.

To illustrate the feature, let's take a look at the infill of Cube A: 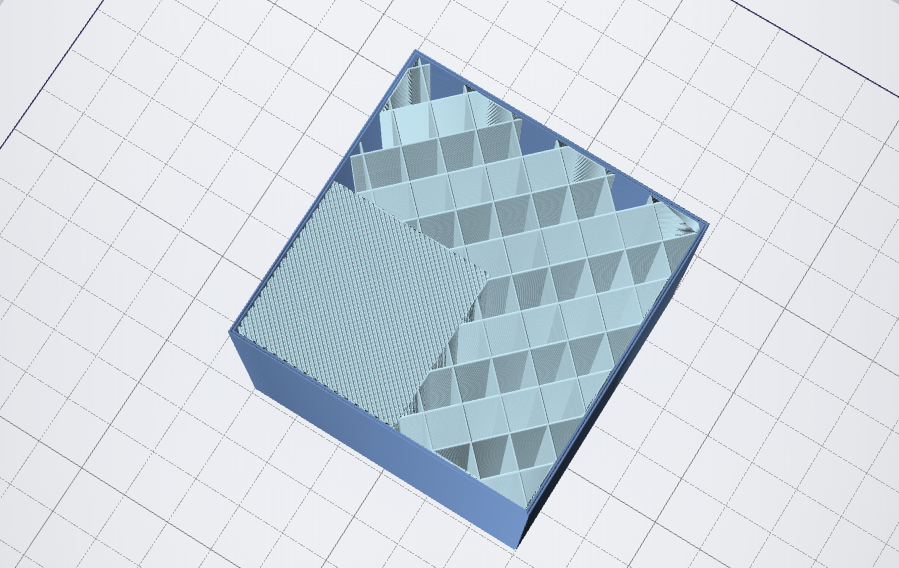 You'll notice that the Modifier disappeared, and that the intersection area has a different Infill Density.

And that is how you use Modifiers, some of the interseting use cases for this are:

Hopefully, you now understand what are Modifiers and what are some use cases where they will come in handy. Next, let's learn how to actually use them in our Workspace API.


How to use Modifiers in the Workspace API ?


Long story short, you're going to need a Workspace file. That Workspace file should contain at least one model to slice and one Modifier model. Meaning, it should contain at least two models.
The Workspace file contains data about the models we're going to use. Technically speaking, it contains a property called models, it's an array that contains as many models as there would have been if we were using Realvision PRO or any other type of slicer.
So, each model in that array, has it's own data (properties). One of which is the metaData property that we are interested in.

The metaData property can be different depending on the type of model (Modifier vs Non-Modifier). And here are examples:

When using Modifiers there are a few golden rules to upholad:


For a full example of a Workspace file in which a Modifier is used, take a look at this file: Download


This section describes how to use the Point Cloud feature.


In the previous section, we took a look at how we can use a Modifier to change the Infill Density of a model. However, that Infill Density is constant throughout the whole Modifier. It's basically the same density in every single Point inside the Modifier. In other words, every point in the final object will have the same hardness.
What if we want to have a variable hardness for different points on the same object?
The good news is, you can do that. It's possible by using the Point Cloud feature along with a Modifier. Which we will explain in this section.

In the previous section, we used two cubes. one is a Modifier and the other is the model we want to slice. In this example, we will do something similar. Except, we won't be changing the properties of just one part of the model to slice. We will change it for the whole object, meaning that we will put the entire model to slice, inside the Modifier.

So, to recap what we have so far:

In the previous section, we mentioned that the Workspace file contains a models property that contains the models that are relevant to the slicing task. Each model has its own metaData property, and it's different for Modifier vs Non-Modifier objects.
The Workspace file is almost the same when using the Point Cloud feature, the only difference is in the Modifier model's metaData:

In the meantime, here is an example of a Modifier object's metaData that uses the Point Cloud feature.

So far, we only explained how to use the Point Cloud feature in the Workspace file. But we haven't really delved into what is a Point Cloud or what are Shore Values. Well, to use the Point Cloud feature of our API, you're going to need to upload not just one file, but two. The two files are the Workspace file and the Shore Values (Point Cloud) file. The Point Cloud file is a binary file containing a 3 dimensional array of doubles, each number representing the hardness at that specific point in the grid. A Point Cloud of 3x3x3 voxels will have a voxel size of 1x1x1mm if the bounding box is defined by the points (0,0,0) and (3,3,3). If the same bounding box contained a 30x30x6 grid of voxels ( arrayDimensions), then the voxel size would be 0.1x0.1x0.5mm. You, as the user of the API need to specify the grid of voxels mentioned above. You do so when you use the POST /ws/tasks endpoint, by providing an array of 3 values in the property called arrayDimensions, if we continue on the example above, you would be providing the following values: arrayDimensions: [30, 30, 6].

A golden rule to be aware of is:
Make sure the FileReference mentioned in the Worksapce file is the same as the actual name of the Shore Values file.


Now that you have somewhat of a good grasp on the structure of the workspace file, how about we generate some of them?

First, we need the following prerequesites:

Open up a CLI anywhere you like and clone the following Github repository:

Next, navigate to the project folder you just clone and then execute the following command to install the dependencies of the project, there aren't many, so this shouldn't take too much time.

If you don't have Nodejs installed, the command above won't work. NPM is a package manager much like Nuget or Bower, but for Nodejs. It comes preinstalled with Nodejs so you don't have to install it yourself.

What that command does is basically just run the index.js file, so it can be translated to a simple: node index.js

You'll get the following result:

Congratulations, you just generated not one, but two workspace files.

Of course, information about the to be used to slice the STL file should be factored in the workspace generating process, and as a matter of fact, you can do that by changing the printer.json file in the ./configs folder.

We used one of the most common printers for this example: CR10.

The default values will work most of the time, but if you have a special case, feel free to contact us and we'll examine it and contact you.

Here, you're going to learn how to quickly start Slicing Workspace files on the cloud which is the main functionality of the REALvision API. But before we start, you're going to need the following prerequesites:

If you're already familiar with one or both of the above information. Feel free to skip to the Quick Start.


Generally speaking, when you make an API request, you specify 4 things:

You can test our APIs with one of the following ways:

In this section, we'll learn how to execute some of the common flows using one of the following three methods:

A reminder of the prerequesites:

Congratulations, you just made your first Successful request to our API.

Next, we'll learn how to execute the whole flow using Postman.